While doing some research on Ancestry found this, not in my direct bloodline, but could be from the same gene pool way back.

Rogier van der Weyden (Dutch: [roːˈɣiːr vɑn dɛr ˈʋɛi̯də(n)]) or Roger de la Pasture (1399 or 1400 – 18 June 1464) was an Early Netherlandish painter whose surviving works consist mainly of religious triptychs, altarpieces and commissioned single and diptych portraits. He was highly successful and internationally famous in his lifetime; his paintings were exported – or taken – to Italy and Spain, and he received commissions from, among others, Philip the Good, Netherlandish nobility, and foreign princes. By the latter half of the 15th century, he had eclipsed Jan van Eyck in popularity. However his fame lasted only until the 17th century, and largely due to changing taste, he was almost totally forgotten by the mid-18th century. His reputation was slowly rebuilt during the following 200 years; today he is known, with Robert Campin and van Eyck, as the third (by birth date) of the three great Early Flemish artists (Vlaamse Primitieven or “Flemish Primitives”), and widely as the most influential Northern painter of the 15th century.

Van der Weyden worked from life models, and his observations were closely observed. Yet he often idealized certain elements of his models’ facial features, who were typically statuesque, especially in his triptychs. All of his forms are rendered with rich, warm colorization and a sympathetic expression, while he is known for his expressive pathos and naturalism. His portraits tend to be half length and half profile, and he is as sympathetic here as in his religious triptychs. Van der Weyden used an unusually broad range of colors and varied tones; in his finest work the same tone is not repeated in any other area of the canvas, so even the whites are varied.

Due to the loss of archives in 1695 and again in 1940, there are few certain facts of van der Weyden’s life. Rogelet de le Pasture (Roger of the Pasture) was born in Tournai (in present-day Belgium) in 1399 or 1400. His parents were Henri de le Pasture and Agnes de Watrélos. The Pasture family had earlier settled in the city of Tournai where Rogier’s father worked as a maître-coutelier (knife manufacturer).

In 1426, Rogier married Elisabeth, the daughter of a Brussels shoemaker, Jan Goffaert, and his wife Cathelyne van Stockem. Rogier and Elisabeth had four children: Cornelius (b. 1427) became a Carthusian monk; a daughter, Margaretha, was born in 1432. Before 21 October 1435, the family settled in Brussels where the two younger children were born: Pieter in 1437 and Jan in 1438, who would go on to become a painter and a goldsmith respectively. 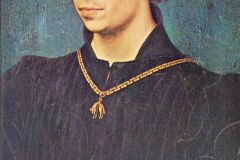 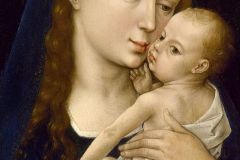 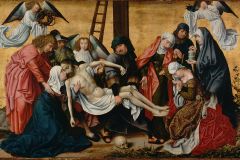 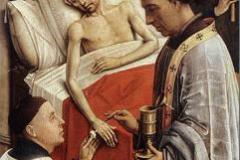 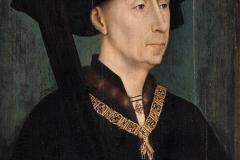 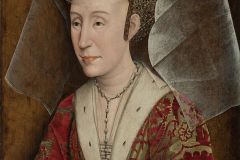 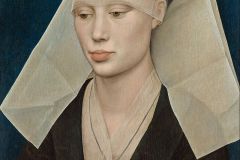 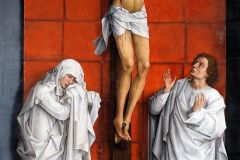 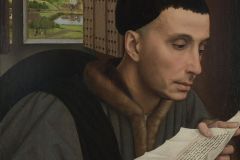 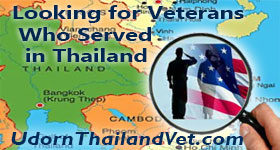